Well, guess what? You may be doing all that is needed for employee engagement and motivation and yet you open your company page on Glassdoor to find all this and many more negative reviews written about you. Started a little less than a decade ago, Glassdoor has become the TripAdvisor of workplace reviews, so to say.

Boasting of about 30 million users, 10 million company reviews, Glassdoor is growing big, one anonymous review at a time. Like a TripAdvisor and a Zomato, Glassdoor relies on user-generated content that the employees (present, former and potential) post on the website. 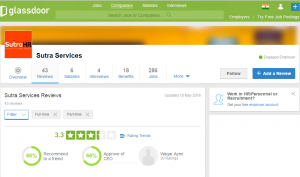 Hence, when companies start freaking out by a slew of negative reviews on Glassdoor, it is very understandable. The possibility that their future hire is checking them out on Glassdoor is very real.

When we got hold of what was being talked about SutraHR on Glassdoor, it wasn’t one of those pleasant web pages to look at. Beyond some well-intended good, honest reviews, there was a barrage of negative, often venomous and of course anonymous posts, showing nothing but a disgruntled and harassed ex-employee. Took us a couple of days and drinks to really make sense of the larger picture coming out of the reviews that we were the monsters (pun intended, obviously).

But finally, we decided to take charge of the situation and write back the Sutra perspective. The answers didn’t come easy, a lot of points asked for a debate internally and then we wrote it all, in our voice, with all our heart.

Not that we are a pro, but here are 7 key lessons we learnt from replying to all the negative reviews on Glassdoor (in no particular order):

When we took notice of the reviews, our ratings were in red. From recommending to a friend to approving the CEO, there was a lot to deal with in between those negative reviews. But we took a call to take those up and reply to every negative comment.

What we learnt was very simple. We can’t just sit and let the world talk. If they are talking bad, don’t give it back in their language but answer them nonetheless.

Yes, as much as every single review looked like distressing and when added to a string of those, it felt like earth-shattering. Well, almost. However, like it always happens, wisdom prevailed. We learned that the negative posts were just a handful of our strength and did not in any way represent the entire Sutra. The reviews were by a minuscule percentage of disgruntled employees and our 100-plus strong team working across our offices seemed very distant from all that chatter. The reviews are definitely skewed towards the negative side and that’s something you need to accept.

Elevators don’t work during evenings? Employees forced to work late hours? Whatever it is, just be honest. You have no idea what questions we have fielded on Glassdoor but we were sure to be explicit and honest. There was no point in camouflaging the facts or truth. If we were wrong, we admitted it. Honesty goes a long way and people can see through the fake, done-up responses by the employers.

In fact, Glassdoor also suggests this way to increase your number of reviews and that way, improving your overall rating. Your HR person can ask people in various departments to write their opinion. The idea here is for them to be honest and fair. And more importantly, as an employer, don’t force people to write. You just need to encourage people to do it and at no point be pushy.
Why are we asserting on ‘don’t be pushy’ so much? Well, for we were accused to be one, that too when our Marketing head had only politely spoken to people about it. So you never know what can come and haunt you on Glassdoor. 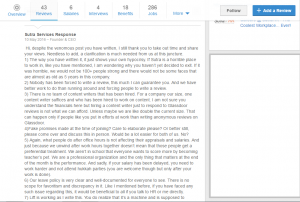 5. Take time and tact to reply, for you are being watched.

Oh believe us there will be moments reading those reviews that you would want to answer some of those in a very not-so-gentle way. But have patience. Read through them all, discuss the reviews with HR and write the replies tactfully. You are not doing it for the ones who wrote it, you are doing it for your brand image and for the prospective employees who are looking you up at Glassdoor.

Okay, we said write tactfully. But don’t lose your sense of humor. Retain the firm, professional tone and at the same time, keeping a lighter tone isn’t that bad. Take it with a pinch of salt and don’t be preachy. While replying, we kept our tone just as what we want to be perceived as. That we could deal with some of the nastiest posts with a wit is what we came about at the end of the exercise and we aren’t complaining.

7. Bring in the change offline to score a positive goal online.

Pest control, repairing the computers, sprucing up the infrastructure, looking in to performance records for complaints of incentive not being paid and working on the free flow of communication in-between teams, we have learned that the best way to get good points online is to work offline on issues you feel need improvement.

In this day and age, any company, big or small, cannot just ignore the power of social media and Glassdoor reviews are just one way to keep your brand flag high, stay abreast with all the points being raised there, keep answering every review and be seen as a company that is earnest in handling such sticky situations despite being thrown on the back foot.

We would love to hear your learnings from Glassdoor too.

One of the best ways to have a great culture is to hire great people for your startup. SutraHR can easily help you do the same, the way we have done this for hundreds of startups & digital agencies across Asia.

From being a qualified Chartered Accountant to being a full-time content writer now. From being a true-blue Delhi Girl to now trying to ace peak hour rush at Andheri station. From always being on the lookout for a chole bhature stall in Delhi to now happily accepting dabelis and vada pavs. Naina always strives for things that challenge her, be it career to interests. Food, travel, people and stories are some of her favorite subject matters.

View all posts by: Naina Madan